in History of Measuring and Precision Hand Tools From Egyptian Cubit to modern SI units and professional measuring tools, they all served the same purpose. Measuring stuff has been one of the concerns of humankind from the beginning.
We all have used the length from the thumb to the pinky at least once to measure and take size. This shows that measuring stuff has been an everyday-need that has concerned everyone, including our ancestors. This science of measurement is what we call Metrology, which the modern version is derived from the politics French revolution, where the standardization of units was first introduced.

Due to agricultural development, people started to search for a solution to calculate the distribution of crops and the volume of food. Going back as far as 6000 B.C., when humankind went from nomadic groupings to established agricultural settlements, it was necessary to have a measuring template for managing population growth and confronting famine.

Many years later, approximately 2900 B.C., the basis of all metric systems of China and the ancient world, was conceived as the system of measures just before the appearance of cuneiform writing in Mesopotamia.

in History of Measuring and Precision Hand Tools , It was in 1875 when scientists found out they need internationally agreed measurement standards at the Metre Convention. However, there were various measuring systems across the world, which were transformed through acculturation and trade.

The Egyptian Cubit and the Roman Mile

The Egyptian cubit was an ancient unit based on the forearm length, around 43 to 53 cm, which was based on the Pharaoh reigning. They also measured the flood level of the Nile in 3000 B.C. with the royal cubit, which was given 6 cubits and 1 palm.

As we consider one mile as 1.609 kilometers, the Roman mile has consisted of a thousand paces of two steps each. Throughout armies marching, soldiers would have put sticks into the ground after every 1000 paces to mark 1 mile, which could’ve been measured differently based on weather conditions and physical conditioning of soldiers.

As mentioned before, by the History of Measuring and Precision Hand Tools , the measurement used in the Roman Empire was used for a long period of time. However, after the collapse of the Empire, the definitions of measurements began to change until by the 18th century, where they were completely different in every country and even regions of the same country.

With the French Revolution, it was time for a new standard for measuring system that brought the introduction of the Metric System. On December 10, 1799, the metric system was officially adopted in France. Eventually, all other countries adopted this system as well.

To ensure a practical system of measurement across the globe, the Système International d’Unités (SI Units) was adopted in 1960, where the seven SI base units were: meters, kilograms, seconds, amperes, kelvins, moles, and candelas. Meters became the base unit of measuring length.

In the modern era, we use measuring and precision hand tools for measuring length, temperature, and etc. Or to level a surface for construction purposes. From calipers and micrometers that give you the most accurate data on the distance between two sides of something to regular rulers and measuring tapes that can show the length of any normal objects around you, they all fulfill the same goal. Maybe the most modern tool for measuring length is the laser distance meter. In order to determine the distance of an object without contact accurately, a laser distance meter sends s pulse of laser light to the target and measures the time it takes for the reflection to return, resulting in the accurate distance by multiplying the speed by the spent time.

Another latest technology for measuring and precision is the Laser Level. In construction and surveying, this control tool uses a rotating laser beam projector that can be affixed to a tripod. Self-leveling lasers automatically find and maintain a level within a specified range and give you a straight-line reference along any surface. The hand tool version of this power tool would be a bubble inclinometer that can determine how steep a particular incline is.

Proper Use of Hand Tools 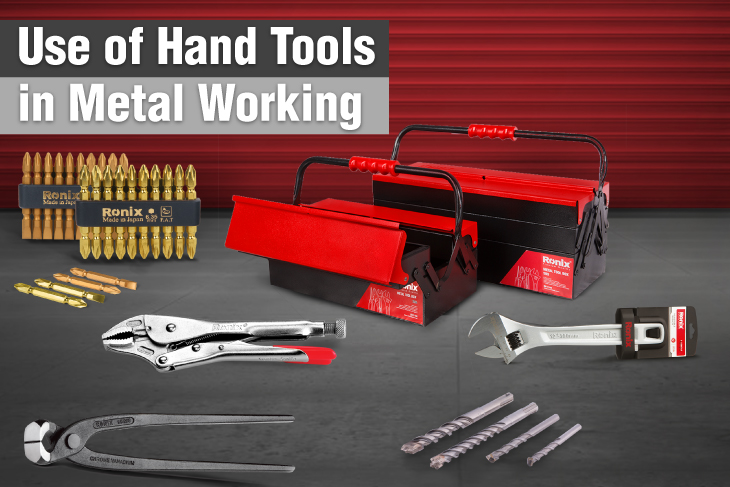 Use of Hand Tools in Metal Working