From the very first inventions like wheels and arrows to the latest gigantic breakthroughs like spaceships and micro-sized brain controller chips, humans have constantly strived for evolution and improvement. Drills have also never been an exception even if we didn’t realize it. As early as the Stone Age, homo sapiens discovered that holes are created by rotational movements and pressure. But it took a long time until the first real drill was developed. Nevertheless, the first drilling tools existed as early as 3,500 B.C. Some sources claim that the first drilling tools with which stones were drilled through existed much earlier. The currently compact, lightweight power units with a pistol-like handle and a trigger have not always looked the same. From ancient Egypt to the heart of the technology in Us, drills have been always changing in power, shape and size. The first drills were bow and auger drills, driven by a variety of sources, including human power, water wheels and windmills, often using belts. But the invention of electric motors revolutionized the machine tool industry, leading to quantum leaps in the functionality and performance of drills.

From stone age to now

The tools used to perform the drilling work varied from time to time and although modern electric drills look like a modern invention, the history of the first primitive drill goes back to the Stone Age. In the Stone Age, our cave-dwelling ancestors used pointed stones to drill holes in materials for their constructions. The next generation of drill-like tools were a slight reversion to pointed stones. The drill of that time consisted of two branch forks and a crossbar. With the help of deer horn or elder wood a drill rotated and the friction was also created by quartz sand. Then by pulling the tool back and forth, one could create holes in stone. It was not until the Middle Ages that a further development of the drilling process became apparent. In the 11th century, roller drills, drilling jigs and racing spindles made of metal were developed. With these, tin, copper and iron could now also be drilled through. Later in the 15th century, the hand crank drill was added. Since about 1550, gun drill machines were used. These were used to give gun barrels the best possible precision. In 1774 this type of drill was further modified by the Englishman John Wilkinson. After the Churn Drills (traced back to China), the Bow Drills (traced back to Egypt), the Auger Drills, Brace and bit, Gimlet, Breast drill, Push drill, Pin chuck and the Jeweler’s drill we reach the contemporary drills.

The most revolutionary moment in the history of power tools happened when people discovered that it was no longer necessary to use their hand power to generate mechanical energy. Thanks to the invention of electric motors in 1834, people today are able to convert electrical energy into mechanical energy. This was one of the greatest technological leaps ever made. The invention of the first electric drill is attributed to Arthur Arnot and colleague William Blanch Brain, both based in Melbourne at the time. They designed and patented the first drill equipped with an electric motor for mining applications in 1889. Speaking of pros and cons, this invention was a breakthrough that made the work of generations of miners, builders, tradespeople and home handymen and women easier, however, due to its size it could only be used on stationary construction sites.

The invention of first electric drill showed craftsmen how much farther the boundaries of machinery and tools could be pushed.

Inspired from the Arthur Arnot and William Brian’s innovation, the German brothers, Wilhelm and Carl Fein, took the second step and converted the electric drills into a handheld, portable device, it was needed to be operated with two hands, though. Since then drills went directly under the spotlight of contractors and tools enthusiasts and its industry turned to the playground of various power tool companies. But It still took more than 20 years to see a new revolutionary movement. S. Duncan Black and Alonzo Decker (of Black & Decker) released the first electric drill, featuring a trigger switch and pistol handle. The new design caught the eyes of contractors and construction workers. Over the years, the initially fragile, bankrupt Black & Decker has taken over several companies and achieved many improvements. They have also worked with NASA and produced the first impact-free wrench for astronauts. Over the decades, the drills have evolved in terms of details such as shape, speed, power, drilling capacity and motor structure. But then again, decades later another decisive milestone in the history of tools has appeared. With the introduction of the first cordless drill on the market for electric drills, all boundaries were pushed back. People were no longer restricted in their range of movement when using a drill. There is still a dispute about the manufacturer of the first cordless drill. Some people claim credit for Black & Decker (1961) and some others for Makita (1978).

In terms of batteries, various companies have been battling to etch their names in the history of drills, specifically cordless ones. Black & Decker introduced its first cordless drill in 1961 powered by a nickel-cadmium battery. These batteries contain toxic heavy metal cadmium and must therefore be disposed separately. It took more than 40 years to make a fundamental shift from NiCd batteries to lithium-ion ones. These from LiCoO2 manufactured batteries gained great popularity all around the world. They have soon become the first choice for the portable devices because of their long charge-discharge lifetime. In 2005 Milwaukee used lithium-ion batteries for their cordless drills and significantly improved cordless-tool technology in form, features and function.

The next drastic step was taken in the motor structure. In 2009 Makita came up with the first drill, featuring a brushless motor and ended up the reign of brushed motors. Brushless motors are more compact, have fewer moving parts and as a result they generate less heat due to friction.

Nowadays the world of drills is as vast as an ocean. Either corded or cordless, there are numerous models of each type. Corded drills suit the best for the heavy duties at constructional jobsites, on the other hand for DIY and everyday tasks people show more interest to cordless drills. There is also a new trend in the power tools industry called “battery switch”, that benefits in price and time and enables you to run several devices with only one battery pack. Several companies are following this trend, such as, Makita, Metabo, Ronix and …. for example, Ronix called its trend “lasting series” and uses lithium-ion battery packs, which are compatible with devices like rotary hammer, industrial blower, impact wrench and etc… This trend reduces visit to the repair shops considerably.

The constant rate of development and evolution guarantees a shining future horizon in the drill industry. Nobody knows what other new technologies will be added, perhaps drills controlled by cell phones, perhaps drills that offer no dust, and perhaps drills attached to a drone to drill at great heights.

I'm Felix Krause, a 28-year-old german travel enthusiast who has visited several countries thanks to his marketing consultant position in one of Ikea's branches -the biggest ready-to-assemble furniture company in the world. I've been working for a long time in this field and it's become one of my biggest obsessions, so i follow that 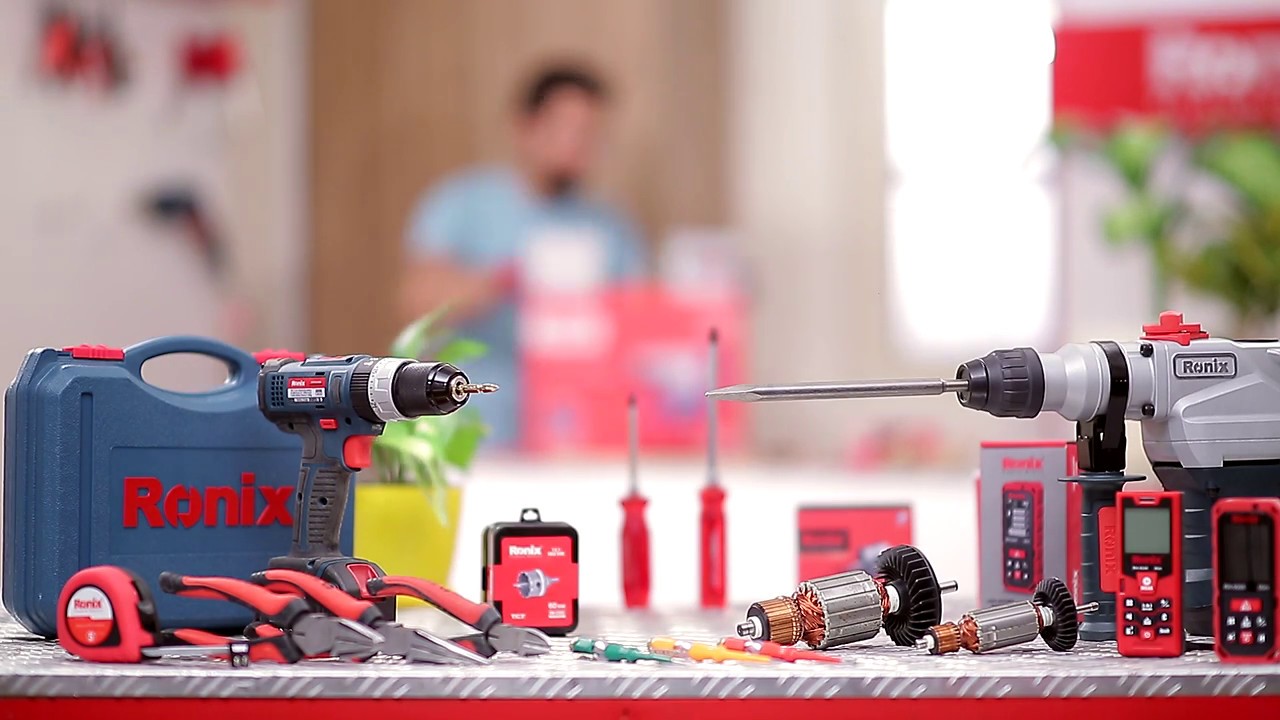